I have avoided writing a review for this book for the past few days now. It just means that the ending is truly official for me. It’s over. No more stories about the raven boys and Blue.  Alas.

I am pleased to say that I enjoyed this book. It was one of my most anticipated releases for April so when I went on summer vacation this July, I put it on my TBR because I could actually dedicate time to it. I even took it with me on my road trip to Colorado (possible post about that later). We reached Pike’s Peak together and went camping! Haha. 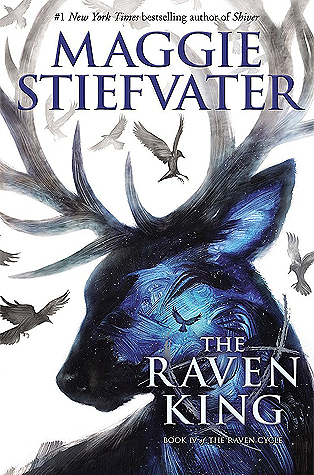 Title: The Raven King (The Raven Cycle #4)
Author: Maggie Stiefvater
Publisher: Scholastic Press
Release date: April 26, 2016
Genre: Young adult, paranormal, urban fantasy
Length: 439 pages (hardcover)
Synopsis: (from Goodreads) “For years, Gansey has been on a quest to find a lost king. One by one, he’s drawn others into this quest: Ronan, who steals from dreams; Adam, whose life is no longer his own; Noah, whose life is no longer a lie; and Blue, who loves Gansey… and is certain she is destined to kill him.

Now the endgame has begun. Dreams and nightmares are converging. Love and loss are inseparable. And the quest refuses to be pinned to a path.”

I’ve said this before but probably not here: Stiefvater awakened my love for the paranormal genre. I’ve read a few of Marion Zimmer Bradley’s paranormal books but it wasn’t YA, and I don’t know if that’s why I didn’t like it.

I gobbled up the entire Raven Cycle. I even listened to the audiobook of The Raven Boys to prepare me a bit for reading the final book in the series, The Raven King. (Pssst, you can’t ever really prepared for one of your favorite series to end.)

We’ve followed Gansey, Adam, Ronan, Noah, and Blue on their journey and I’ve loved every single piece of it. I loved the blossoming of romance between the characters and the growing friendship from the ones we didn’t think would ever get along. Stiefvater writes interesting and sometimes crazy characters. We get more of that in this final book.

Me, every time Adam and Ronan interacted:

One of my OTPs, guys. Along with Blue and Gansey, of course. ❤

I will say that I was a bit confused initially. I don’t know if it’s because I needed an actual reread of the series before going in. Anyways, that dissipated quickly and I got back into the flow of Stiefvater’s writing style.

Let me tell you, stuff goes down in this book. You have characters you didn’t think would be involved and magic is freakin’ everywhere. Each individual character has their own role to play in this story. Each character is unique and that’s what I love about this. Once you think you know what happened, it turns out you don’t really. XD

If you loved The Raven Cycle, you won’t be disappointed. I think the ending is a bit open-ended but I don’t mind that so much here because in my mind, all my couples are together forever. 😀 The friendships in this book are phenomenal as well. ❤

Two of my favorite quotes (I have many):

“We chose Fox Way. We made it, Calla and Persephone, and I. But it’s only your origin story, not your final destination.” – Maura, talking to Blue

“The head is too wise. The heart is all fire.” – Gwenllian to Gansey

One thought on “Review: “The Raven King” by Maggie Stiefvater”