Ah! Finally time to write about another lovely and wonderful author meet!

If you haven’t been keeping up, I’ve had the wonderful opportunity to meet Sabaa Tahir, Sarah J. Maas, and Leigh Bardugo all within a three week timespan last month. I wrote about all those experience and now I’ll conclude with Leigh. It’s sad but amazing at the same time because these three authors were within a 2 hour vicinity and how can you not?! 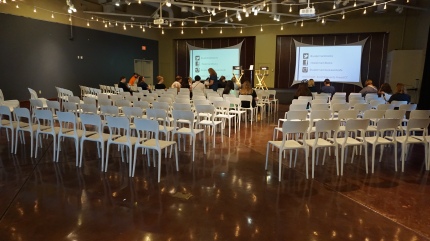 Leigh’s signing was at this super cute place called Adobe Venue in Wichita, KS. It’s about a 2 1/2 hour drive for me. The signing was on a Thursday so I took a day off work and Husband and I booked a hotel for a one night stay. The signing was hosted by Watermark Books, the same bookstore that hosted the Sarah J. Maas signing a few weeks earlier.

Bonus: Ally Carter was also there promoting her book series as well! Unfortunately, I’ve never read anything by Carter so I mainly there for Leigh. It was fun getting to know authors even though you haven’t read their books. Such as, I had no idea Ally Carter was from Oklahoma! Well, the more you know… ;P

There were (non-alcoholic) drink specials! I tried the Ketterdam which was a delicious mix of orange juice, pineapple juice, and a little bit of lemon-lime soda. I could have drank a whole bunch of them… XD 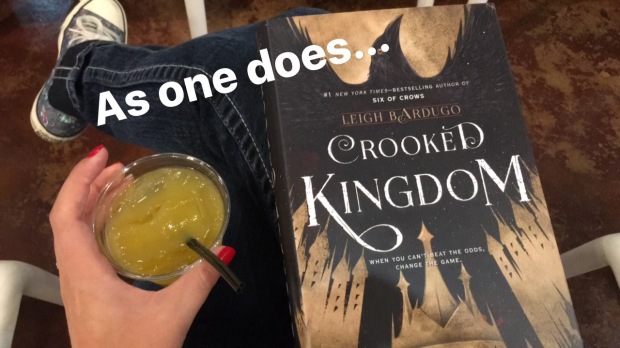 I might have had a lot of fun by myself. XD

Both Leigh and Ally were funny and down-to-earth! They talked about their writing process (which as a writer, I love to hear about!) and also about their inspirations (lots of movies), and overall, I had a great time. They took questions from the audiences and those are always my favorite. I love how encouraging authors are. They always encourage us to chase after our dreams and don’t let anyone tell us we can’t do it.

Because I pre-ordered Crooked Kingdom, I received a priority signing ticket. This worked out better for me than the SJM one. Instead of being 200th in line, I was around 30th or so. 🙂 I found the author signing way less intimidating than the one for Sarah. Granted, there weren’t as many people here as there was for Sarah but the venue allowed for a lot more ease, room, and worked great for pictures. I brought all of Leigh’s books with me, so I was fumbling around with 5 books, my phone, and my digital camera!

Yay for pictures with authors! I believe Leigh’s agent was there, and she’s the one who took this picture! 🙂 If you notice on the bottom left, there’s a pile of cards with art made by Kevin Wada. We randomly picked, and if the first 6 people picked up the Wylen/Kuwei card, they also won the poster made by Kevin, too! I pulled Kaz. I hoped for Nina or Matthias but I wasn’t disappointed!

It was such a great day. 🙂 I was so glad to be able to meet Leigh and I’m beyond thrilled to have met 3 of my favorite authors this past month.

4 thoughts on “I Met Leigh Bardugo and *fangirl*!”