Wow. Where do I even begin reviewing a book like this?

I self-harmed for a little over 5 years so I’m fairly open-minded when it comes to book with characters who also self-harm. The truth is there aren’t many of them but the ones I’ve read are quite good. Girl in Pieces is more than good. It’s harsh, brutal, raw, honest, and powerful. Sometimes I found it overwhelming, sometimes cliché, but it’s always nice to know you aren’t alone–that you were never alone in your pain. 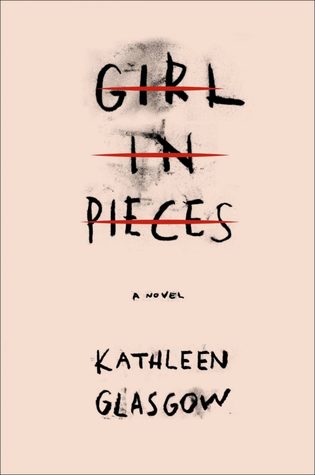 Title: Girl in Pieces
Author: Kathleen Glasgow
Publisher: Delacorte Press
Release date: August 30, 2016
Genre: Young adult, contemporary
Length: 416 pages (hardcover)
Synopsis: (from Goodreads) “Charlotte Davis is in pieces. At seventeen she’s already lost more than most people lose in a lifetime. But she’s learned how to forget. The broken glass washes away the sorrow until there is nothing but calm. You don’t have to think about your father and the river. Your best friend, who is gone forever. Or your mother, who has nothing left to give you.
Every new scar hardens Charlie’s heart just a little more, yet it still hurts so much. It hurts enough to not care anymore, which is sometimes what has to happen before you can find your way back from the edge.
A deeply moving portrait of a teenage girl on the verge of losing herself and the journey she must take to survive in her own skin, Kathleen Glasgow’s debut is heartbreakingly real and unflinchingly honest. It’s a story you won’t be able to look away from.”

This book throws punches. It’s not light, delicate, or flowery. It’s written with pure, burning emotion. Charlie’s lived a hard life. It’s obvious from the very beginning especially with the situation she finds herself in. There’s a doctor whom the girls have nicknamed “Casper”, who takes a particular interest in her and Charlie’s roommate, Louisa, who also has deep, dark troubles of her own. Charlie tries to hold on the past but the truth is, she’s stuck in the past to the point where she won’t move forward. But when she reconnects with an old friend named Mickey, Charlie clings to what little hope she has to eventually leave the center.

And she does. She finds herself miles and miles away, working as a dishwasher in a little cafe called True Grit. She meets a few eclectic individuals, none more intriguing than late-20s Riley West, once a famous musician but now dead bit who sucks cigarettes like they’re water and drinks beer like it’s his lifesaver. While both drawn to one another, Charlie and Riley walk down a scarred path, each with demons of their own, as Charlie feels abandoned by the one friend she has left.

Despite how heavy this book is, there are small tokens of kind gestures and meanings–spots of kindness and hope if you look close enough. Charlie does eventually get better but the process is slow. It’s like that saying “two steps forward, one step back.” You rise but you also fall. This is true for Charlie.

Eventually, Charlie falls back in love with drawing and when a harrowing event takes her out of home, she finds solace in the silence with two of her co-workers, Linus and Tanner, siblings who bring Charlie with them to see their grandfather Felix in New Mexico. Charlie needs healing and I think she finds a bit of it there. Actually, I think she finds more of it there than she ever did anywhere else. I also think she needed to find out who she was now as herself and alone. While it doesn’t “cure” her, it helps her, and we find Charlie able to move forward.

This isn’t super relevant but I usually always read the “author’s note” at the end and I can’t help but respect the author for being brave and writing such a story and also sharing her story. It helps me realize that I was never alone either although it may have felt like it many, many times when I self-harmed. I’m glad you shared your story and you wrote Charlie’s.

4 thoughts on “Review: “Girl in Pieces” by Kathleen Glasgow”