Thanks to NetGalley and Houghton Mifflin Harcourt Children’s for giving me a free digital copy in exchange for an honest review. 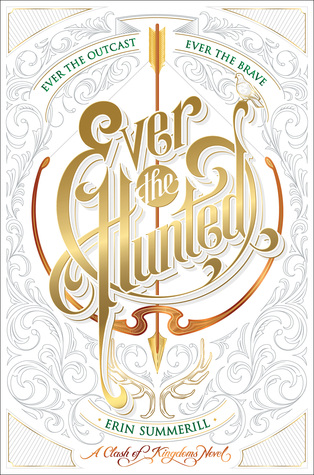 Title: Ever the Hunted (Clash of Kingdoms #1)
Author: Erin Summerill
Publisher: HMH Books for Young Readers
Release date: December 27, 2016
Genre: Young adult, fantasy
Length: 400 pages (hardcover)
Synopsis: (from Goodreads) “Seventeen year-old Britta Flannery is at ease only in the woods with her dagger and bow. She spends her days tracking criminals alongside her father, the legendary bounty hunter for the King of Malam—that is, until her father is murdered. Now outcast and alone and having no rights to her father’s land or inheritance, she seeks refuge where she feels most safe: the Ever Woods. When Britta is caught poaching by the royal guard, instead of facing the noose she is offered a deal: her freedom in exchange for her father’s killer.

However, it’s not so simple.

The alleged killer is none other than Cohen McKay, her father’s former apprentice. The only friend she’s ever known. The boy she once loved who broke her heart. She must go on a dangerous quest in a world of warring kingdoms, mad kings, and dark magic to find the real killer. But Britta wields more power than she knows. And soon she will learn what has always made her different will make her a daunting and dangerous force.”

First off, the cover is gorgeous! To me, white books are really pretty because I hardly ever see them. Or maybe… I haven’t been looking? I don’t know.

So I’m a bit on the fence about this book. I liked some aspects but the others, not so much. I don’t know–it’s almost like I can’t put it in words but I will try really hard because overall, while I did enjoy the book, it lacked and fell short in many areas.

While the character development was good, truthfully, it got in the way of the plot. I really felt the book dragged on a bit and I was so tired of hearing about how much Britta likeed Cohen. Like, I get that he’s like your first “crush” or something but I couldn’t get over how I didn’t want to hear anymore of it, and truthfully, I wasn’t fully convinced of the romance. It just felt…cliché for Britta to fall in love with her father’s apprentice. Despite talking about how much she disliked him for not leaving her high and dry, I expected her to fight her feelings for him a bit more. As for Cohen…meh. I just felt meh about him. He wasn’t thrilling or exciting to me.

Magic! I loved the magic! The world building wasn’t too bad either. I’m excited to see how the magic will play a bigger role in the sequels. However, it’s obvious there’s some mystery behind Britta and her mother. I also found certain events a bit cliche and almost too…convenient, if that’s the right word. I guess what really intrigued me was the mystery behind a lot of the actions in the story. We still don’t really know why Britta’s father was killed. I will say for sure that the ending–the ENDING–was really good. I’m such a sucker for stories that tie royalty into the plot in this way and I can really tell this will be interesting.

The story was fairly slow at some parts too. Britta herself isn’t a super interesting character. I hate to say how ordinary she is outside of her ability because I just feel bad saying it really but … I mean, really, she is. I know it’s too early to make that judgement but I can’t help it.

Right. So. Yeah, that’s all I have to say. This book didn’t amaze me. It didn’t keep my reading up late into the night, and at some points, I had to force myself to read it.

One thought on “ARC Review: “Ever the Hunted” by Erin Summerill”