You know how we have those books sitting our shelves for months and months at a time before we actually get to them? I mean, I can’t be the only one, right?

When I heard that Nicola Yoon was going to be at the North Texas Teen Book Festival this weekend, I knew I had to read her books. I felt obligated, too, because I felt strange meeting an author while I haven’t read their books. Anyways, that has been remedied! lol 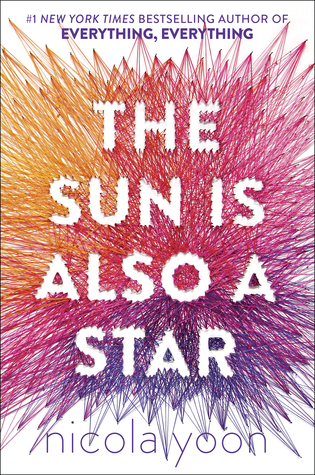 Title: The Sun Is Also a Star
Author: Nicole Yoon
Publisher: Delcorte Press
Release date: November 1, 2016
Length: 384 pages (hardcover)
Genre: Young adult, contemporary
Synopsis: (from Goodreads) “Natasha: I’m a girl who believes in science and facts. Not fate. Not destiny. Or dreams that will never come true. I’m definitely not the kind of girl who meets a cute boy on a crowded New York City street and falls in love with him. Not when my family is twelve hours away from being deported to Jamaica. Falling in love with him won’t be my story.

Daniel: I’ve always been the good son, the good student, living up to my parents’ high expectations. Never the poet. Or the dreamer. But when I see her, I forget about all that. Something about Natasha makes me think that fate has something much more extraordinary in store—for both of us.

The Universe: Every moment in our lives has brought us to this single moment. A million futures lie before us. Which one will come true?”

If I’m being honest, I can’t think of enough words to describe how much I loved and thoroughly enjoyed this book. I didn’t know much about it outside of it had something to do with immigration and there was a Korean character. Already, my interests were piqued at the mention of a character like myself. But this story is so much more than that. It’s an intricate juxtaposition of two different families: Daniel Bae’s family, whose parents came to America from South Korea legally, and Natasha Kingston’s family, whose father came from Jamaica to America illegally and then his wife and children followed afterward.

After a brush with the law and unable to defend themselves against deportation, the Kingstons find themselves being deported. The Sun Is Also the Star tells Natasha and Daniel’s story through the one day they spent together. And it’s lovely.

I simply loved how not only we read about Natasha and Daniel, but also have other characters the two came across the day they spend together, including Irene, Natasha’s father Samuel, a drunk driver, and a lawyer. I loved how each of these stories were intricately woven together, and while it may seem like random chaos, there was certain organization in it. (Appealing to both Natasha and Daniel’s way of thinking.)

I also enjoyed how everything seemed to fit together–down to some of the Korean stereotypes, and how heartbreaking it was read about Samuel and even Daniel’s father. It really makes you think about the decisions parents make for the sake of their children–because they want something better for their children. Something that Daniel’s father really stuck out to me, and it left me with an appreciation for my own parents’ sacrifices.

It’s crazy to think that this book spanned a single day. Some people may think what happened between Natasha and Daniel was unrealistic, but I’m a bit of a believer in the organized chaos–how two people can spend a single day together and it changes them. The ending wasn’t what I thought it would be, but the epilogue definitely made up for it. I was near to tears when I read it, but also very happy.

I’m so glad I read this book. I wasn’t super fond of Everything, Everything, but this book shows Yoon’s matured writing style, and I loved how invested I was in the characters.

If you didn’t already know, I’m participating in Book Madness 2017. You can vote for me & my favorite character here, and enter for a chance to win some bookish prizes! 🙂

12 thoughts on “Review: “The Sun Is Also a Star” by Nicola Yoon”