If you missed my first book news post, you can check it out here!

I kind of dig this “reporter” feeling when I gather some of the small book news that happened this week. I wouldn’t have made a blog post if it didn’t include the authors of two book series I’ve thoroughly enjoyed.

So here we go!

Last year, Publisher’s Weekly announced that Disney-Hyperioan is launching “Rick Riordan Presents,” an imprint “devoted to mythology-based books for middle grade readers.” How awesome is that?! I see my future self more than skimming the surface of middle grade literature… 😉  (See the full article for this here.)

Another announcement was made on April 25 that the imprint has acquired its first three titles, including Roshani Chokshi, author of The Star-Touched Queen and its follow-up, A Crown of Wishes. Chokshi’s MG quartet is titled Aru Shah and the End of Time with comparison titles like Percy Jackson and Sailor Moon. The first book in this four-book series is expected to release in April 2018.

Another exciting title from this imprint is from Korean author, Yoon Ha Lee, writer of “sophisticated science fiction for adults.” The title of his standalone MG book is Dragon Pearl which he describes as “a space opera based on Korean mythology.” HELLO. Does that not sound awesome?! I’m so excited to see half of my culture represented in literature! I certainly don’t remember reading many books with Korean characters when I was in middle school and high school.

You can read the full article from Publisher’s Weekly here.

On Wednesday, author Tahareh Mafi announced via Twitter she’ll be extending the Shatter Me series with three new books! She also shared the official Entertainment Weekly article. She also answered some burning questions on Twitter as well. I provided some screenshots, so you don’t have to read all my rambling, lol! 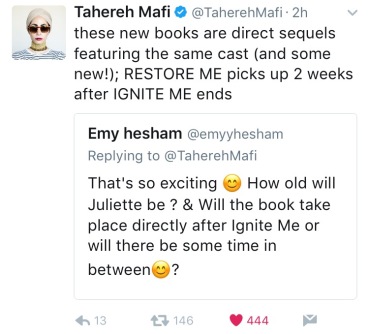 It’s funny because the first thing I thought when I finished Ignite Me was, “What’s going to happen now? I always felt it was kind of an open ended ending. I understand sometimes authors may do this do this to let the reader figure it out, but I just couldn’t handle it, lol!

Also, there’s the title for book 4, Restore Me!

Also, OMG, a dual POV! I’m so excited! I’m thrilled to see their relationship progress, and all the steamy scenes because, let’s be frank, Juliette and Warner are steamy together! But I also look forward to Juliette’s character arc. There was such great character development in Juliette throughout the series, so I’m excited for a strong, confident Juliette.

So… When will Restore Me be released…?

Less than year from today! Of course, release dates are tentative but they usually stay on schedule unless the editor or author is dissatisfied with particular scenes. But I’m crossing my fingers that March 6, 2018 will be the actual release date!

This also makes me wonder about the covers! Will we keep the seasons and the eyes or will it be something brand new?! Ah, who knows! Now to wait in anticipation some more! 😛