This book came on my radar earlier in the year. The hype around it increased tenfold closer to the release of the book, and it recently hit the NYT Best Seller’s list. I actually won a copy in a giveaway, and was so excited to dive into it. Let me just say it did not disappoint! 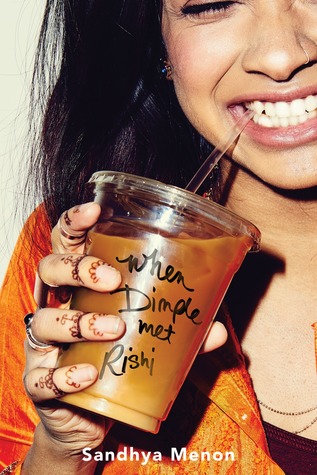 Title: When Dimple Met Rishi
Author: Sandhya Menon
Publisher: Simon Pulse
Release date: May 30, 2017
Genre: Young adult, contemporary, romance
Length: 380 pages (U.S. hardcover)
Synopsis: (from Goodreads) “Dimple Shah has it all figured out. With graduation behind her, she’s more than ready for a break from her family, from Mamma’s inexplicable obsession with her finding the “Ideal Indian Husband.” Ugh. Dimple knows they must respect her principles on some level, though. If they truly believed she needed a husband right now, they wouldn’t have paid for her to attend a summer program for aspiring web developers…right?

Rishi Patel is a hopeless romantic. So when his parents tell him that his future wife will be attending the same summer program as him—wherein he’ll have to woo her—he’s totally on board. Because as silly as it sounds to most people in his life, Rishi wants to be arranged, believes in the power of tradition, stability, and being a part of something much bigger than himself.

The Shahs and Patels didn’t mean to start turning the wheels on this “suggested arrangement” so early in their children’s lives, but when they noticed them both gravitate toward the same summer program, they figured, Why not?

Dimple and Rishi may think they have each other figured out. But when opposites clash, love works hard to prove itself in the most unexpected ways.”

The fun thing about this book is I saw myself in both of these characters. No, I’m not Indian. I’m not even full Korean, but I understand, just a little, what it’s like to be caught in your culture and its traditions–the mixed desire to want to please your parents, yet be yourself, and somehow follow a variety of what’s most likely misogynistic customs.

Everything that tugged on my heartstrings was in this book. I love how fiercely Dimple loved her family, even though it was hard to see sometimes. Her dad really made me laugh as he would always awkwardly disappear from the room if Dimple and her mom were arguing. Dimple simply wanted to be herself, but she felt smothered by her mother, so it’s a surprise when they let her attend a six-week summer coding program. Little does she know that her parents had a hand in that…

Rishi obeys his parents. He thinks Dimple is the best choice to be his wife. After all, his parents chose her for him, right? I love how everything is turned on its head though.

Some of the most heart-wrenching scenes took place equally between Dimple and Rishi. It’s obvious Dimple knows what she wants. She’s going to Stanford. Rishi’s enrolled in a program that makes his parents happy, one that’ll bring success, recognition, and money. But the best part about this is, while Rishi embraces his culture in ways that Rishi doesn’t, he has a specific talent he holds close to his heart.

I think this is where Dimple and Rishi really connected, and it was pretty dang adorable. At first, I sort of rolled my eyes at the whole thing. Well, obviously they hate each other in the beginning but things change… But it’s true! And it wasn’t in a forceful way either, and things don’t really end you thought they would (though it does end in the MOST ADORABLE WAY EVER). However, I will say I thought the romance felt a bit…rushed, and I couldn’t really downplay it on the situation at hand.

I really appreciated Dimple and Rishi’s relationship with their respective parents. A lot of times, parents are overbearing, and it’s hard to recognize the love and care they have for us when they’re constantly telling us what to do and what they want for us, instead of respecting our wishes and desires for our own future. But the thing is, their incessant nagging and complaining is their quirky way of saying, “I love you.” (It’s possible I may have recently learned this in my own life, but whatever… :P)

8 thoughts on “Review: “When Dimple Met Rishi” by Sandhya Menon”

Happy Sunday, friends! The holiday break went by too quick for me. 🥲 But now I’m just counting down the days until an even longer holiday break next month!
Happy Wednesday! Look at me—not posting on a weekend! Well, it’s Thanksgiving tomorrow and I’m off work for a couple days so I might as well post when I can!
I absolutely devoured DEVIL’S DAUGHTER earlier this week. It was just what I needed when I wasn’t feeling well. I think Phoebe and West might have one of my favorite love stories of this series (though Helen and Winterborne are a favorite too)! I cannot wait to read the rest of the books!
Despite it being November, I’m still working through my spooky season TBR. @scholasticinc was kind enough to send me a finished copy—thank you! It’s the perfect atmospheric, witchy read, and I love how magic is intertwined in every day life.