I wasn’t sure if I wanted to post a reread review of this book, but when I looked and saw that it’s been two years since I read this book, I thought I ought to. 🙂 With Tower of Dawn releasing next month, I definitely decided it was time for a reread. Good thing, too, since I read this and a lot of mixed feelings, especially about the fact I forgot so much stuff! XD

This review will definitely be full of spoilers! Read at your own risk! You can read my first review of this book over on Goodreads. 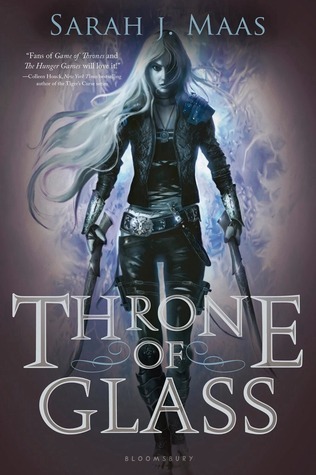 Title: Throne of Glass (Throne of Glass #1)
Author: Sarah J. Maas
Publisher: Bloomsbury USA Children’s
Release date: August 7, 2012
Length: 404 pages (hardcover)
Genre: Young adult, fantasy, romance
Synopsis: (from Goodreads) “When magic has gone from the world, and a vicious king rules from his throne of glass, an assassin comes to the castle. She does not come to kill, but to win her freedom. If she can defeat twenty-three killers, thieves, and warriors in a competition to find the greatest assassin in the land, she will become the King’s Champion and be released from prison.

Her name is Celaena Sardothien.

The Crown Prince will provoke her. The Captain of the Guard will protect her.

And a princess from a foreign land will become the one thing Celaena never thought she’d have again: a friend.

But something evil dwells in the castle—and it’s there to kill. When her competitors start dying, horribly, one by one, Celaena’s fight for freedom becomes a fight for survival—and a desperate quest to root out the source of the evil before it destroys her world.”

I’m so glad I reread this, friends! There is literally so much stuff I forgot, lol! Dorian has a mom and a younger brother, and I don’t remember a thing about them! I forgot everyone’s age, too! For some reason, I thought Celaena was only 16 in this book. Nope, she’s 18. Dorian’s 19, and Chaol is 22! 😮 Now I’m going to take in account their ages as the story progresses. I’m really excited to start Crown of Midnight because I keep saying it’s my favorite, and I hope it continues to be my favorite when I reread it.

All right. So some of my main problems I had in my first read still exists. Celaena is so multi-faceted, but some aspects of her personality really irk me. She’s confident–awesome! I like that. But she’s also cocky, and this cockiness stays throughout the series (I distinctly remember reading Empire of Storms and saying I doubt Celaena/Aelin would be a close friend but I didn’t like her attitude). I love her fierceness, though, and how she slowly opens herself up to Dorian, Chaol, and Nehemia (still bitter about what happened to her, too. She didn’t deserve her fate). She’s an assassin who loves sweets and dressing up, but she’s also deadly with a sword. Because this is the first book in the series and we don’t necessarily see the assassin side of Celaena, a lot of information is told, rather than shown to us, and like before, it was difficult to believe that part of her.

This also brings up another thing I forgot: Dorian and Chaol both start to have romantic feelings for Celaena. I always thought (and I’m glad!) she and Dorian remained good friends, especially in books 3 and 4 because I felt like their goals were similar. I will admit that I struggled to understand why Chaol and Dorian started liking her romantically. Dorian’s excuse was sort of “I’ve never met anyone like her” or “she’s not like one of these court ladies” and I’m like, “!!!!!!” Whatever. (Dorian’s still one of my favs, though. ❤ )

Because I’ve read this entire series, I see how Maas weaved in Celaena’s true heritage. But because Celaena pushed aside that part of her every time in came up, readers were left in the dark as well. Also, the whole thing with Elena, I think, really made Celaena take another look at that part of her that she continually ignored. (I also forgot that Dorian and Celaena are very distantly related! 😮 )

In terms of writing, it’s obvious how new Maas was, but she’s a great storyteller, and I look forward to rereading the rest of this series! I doubt it’ll actually be before Tower of Dawn arrives but I’m shooting to reread at least up to Queen of Shadows and including The Assassin’s Blade in there somewhere.