I think this is the first time I didn’t finish an ARC. For some reason, I always feel guilty not finishing them, especially since I specifically request them (via NetGalley), under the assumption I’ll love it.

Thanks NetGalley and Flatiron books for giving me a free digital copy in exchange for an honest review. 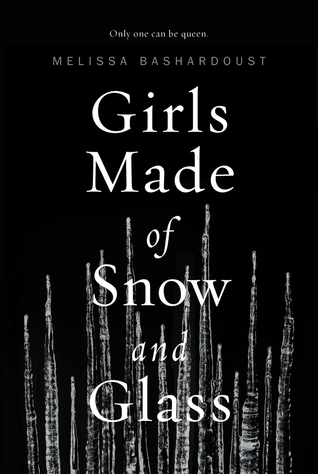 Title: Girls Made of Snow and Glass
Author: Melissa Bashardoust
Publisher: Flatiron Books
Expected release date: September 5, 2017
Genre: Young adult, fantasy
Length: 384 pages (hardcover)
Synopsis: (from Goodreads) “At sixteen, Mina’s mother is dead, her magician father is vicious, and her silent heart has never beat with love for anyone—has never beat at all, in fact, but she’d always thought that fact normal. She never guessed that her father cut out her heart and replaced it with one of glass. When she moves to Whitespring Castle and sees its king for the first time, Mina forms a plan: win the king’s heart with her beauty, become queen, and finally know love. The only catch is that she’ll have to become a stepmother.

Fifteen-year-old Lynet looks just like her late mother, and one day she discovers why: a magician created her out of snow in the dead queen’s image, at her father’s order. But despite being the dead queen made flesh, Lynet would rather be like her fierce and regal stepmother, Mina. She gets her wish when her father makes Lynet queen of the southern territories, displacing Mina. Now Mina is starting to look at Lynet with something like hatred, and Lynet must decide what to do—and who to be—to win back the only mother she’s ever known…or else defeat her once and for all.

Entwining the stories of both Lynet and Mina in the past and present, Girls Made of Snow and Glass traces the relationship of two young women doomed to be rivals from the start. Only one can win all, while the other must lose everything—unless both can find a way to reshape themselves and their story.”

I’m afraid this will be a short review. I thought this book would get better as I read, but I found the more I read, the more I couldn’t stand it. The characters felt vapid and dull, the world-building flat, and the plot itself dull. I didn’t mind one of the main characters, Lynet, and I liked her fascination with the court surgeon, Nadia. It’s a nice f/f romance (I would assume it’s a romance since Lynet seems more than drawn to Nadia) but even when I stopped at 47%, there wasn’t a lot of development in that area. What could have been a promising, budding relationship was shoved onto the back burner.

I’m not sure if some point of the novel was to show the men in both Lynet and Mina’s lives as horrible, but I definitely thought so. Sure, Lynet’s father, King Nicholas, is protective of his daughter, but he soon becomes overbearing, and later, his odd wishes for Mina and Lynet’s relationship is hard to understand. Quite frankly, it seems downright cruel. The same goes for Mina’s father, Gregory. I mean, we immediately see him as a vicious man with plans to use his daughter to his own gain. I don’t disregard or unlike Mina’s dislike of him.

I didn’t care much for the writing. I was not enthralled while reading the first few chapters, and the desire to continue reading this book decreased each day. Soon, it became a chore, and at that point, I realized I couldn’t care less about the fates of these two women. But I won’t deny that their wish to break away from the path both their fathers (and Mina’s husband) had for them is admirable. Both desire to make their own way in the world they’re in, and we see them ever so slowly possibly going in that direction.

Unfortunately, this simply didn’t capture my attention, and I was both disappointed and saddened at the result.

You can pre-order this book from Amazon, Barnes and Noble, IndieBound, Book Depository, or other major booksellers.

5 thoughts on “DNF ARC Review: “Girls Made of Snow and Glass” by Melissa Bashardoust”