WWW Wednesday is a blog meme started by Should Be Reading. Here, you answer these 3 questions:

This is actually quite a good follow-up to my second WWW where I actually planned out my next reads. I doubt that’ll happen this time around… But you know never! 😛

Despite having Albertalli’s debut novel, Simon vs the Homo Sapiens Agenda on my bookshelves for months (surprised? I’m not, lol), I picked up The Upside of Unrequited while I was strolling through the local library. I have a bad habit of picking up books from the library that I may not read for a while. And, quite frankly, it really doesn’t help by giant TBR of bookshelves at home. But hey, #bookwormproblems, right?

Anyway, this book is super adorable. It tells the story of seventeen-year-old Molly and her twenty-six crushes. There’s lots of nerdiness and diversity (even a Korean character!), so it’s currently a win in my book. I’ve been reading slowly lately so I’m just half-way through it, and enjoying it so far. 🙂

Y’all know I listen to audiobooks all the time. They’re my savior while I’m at work, and they help me meet my Goodreads reading goal. 🙂 While I own Like a River Glorious, I listened to the first book via audio and enjoyed it, so I figured I ought to continue to be consistent. 😛

This book takes place in the mid-1800s America during the gold rush of California. The main character, Leah Westfall, has the ability to sense gold. The first book was basically her journey to California to escape her uncle. It’s basically like the Oregon Trail…but for gold. Anywho, I’m enjoying it so far. The third and final book, Into the Bright Unknown, came out just last week. The covers for this series are absolutely gorgeous, and I hope to add the book to my shelves soon. 🙂 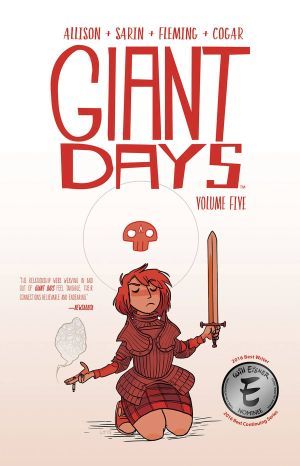 I’ve been cheating a little on my Goodreads challenge by reading graphic novels. 😛 Okay, so it’s not really cheating but the books are short as they’re usually just 4-5 single issue comics bound into a single volume. I’ve picked up Giant Days again, and finished volume 5 just this past weekend.

This is definitely a great series. You could say it’s young adult, but I’d up it just a little and say it could be considered new adult. The story revolves around three girls named Susan, Daisy, and Esther, who are housemates in their first year of college. Volumes 1 – 5 is about them navigating their freshman year. They never fail to make me laugh out loud, and while I haven’t read a lot of graphic novels, this has become one of my favorites.

I also finished The Color Project by Sierra Abrams. The review for that will go up next week. While I enjoyed it, I didn’t enjoy it as much as I thought I would. I picked it up from my local library, but the weird thing is that because of the publisher complications (the publisher sent out ARCs as finished copies), so the library had the book with its final cover but it was actually an ARC. This was a quick read for me. I won’t say much about it since my review for it isn’t out yet… But if you’re interested, keep your eyes peeled!

Well, since I have this crazy habit of checking out books at the library though I have an overwhelmingly large TBR pile… I don’t know what I’ll read next, but I can tell you what I recently checked out from the library in hopes that it’ll motivate me to read it.

I have Lady Midnight on hold as an audiobook. I highly doubt I’ll be able to get through the entire book in the 2 week type period I’ll have it checked out, and considering I’m #6 in line (a line I’ve been in for over a month now) for the 4 copies of the audiobook the library has, it might be more logical to physically read this book than listen to it via audio. But then again, if it’s so good that I want to read Lord of Shadows right after… When the third book doesn’t come out for like an entire year or something? Geeeeeees. What will I do? lol

While I look forward to going back into the Shadowhunter world, I’m still hesitant. The Mortal Instruments isn’t my favorite, but I adored The Infernal Devices so this one is really a toss-up. 😛 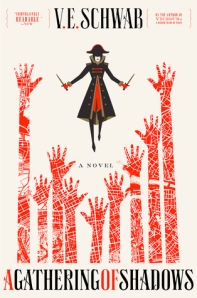 This is actually the second time I’ve checked out Heir to the Sky by Amanda Sun. I think what made me return it the first time without reading it is my TBR pile. Haha.

I thought I’d give the Shades of Magic trilogy another try. I read A Darker Shade of Magic over 2 years ago and though I liked it, I wasn’t blown away, so I haven’t bothered picking up the sequel. But people keep saying the second book and even the final book, A Conjuring of Light, are amazing and way better than ADSoM… So here I am. 😛 I’ll have to read an in-depth recap of the first book before going into AGoS, but maybe I’ll be blown away? I mean, I love Schwab’s Monsters of Verity duology so I just have such high hopes for this series, too, now.

The Fallen Kingdom is the third and final book in The Falconer trilogy by Elizabeth May. I definitely enjoyed the first two books, but sadly, it took my forever to finally pick up the third. I can’t remember a lot that happened in the second book, The Vanishing Throne, so I’m going to have to find a recap before going into this final book.

All right, well, that was…a lot. Truthfully, I quite enjoy these posts. Since I love talking about books, I enjoy talking about my current reads and everything in between. 🙂 Hope I didn’t bore you!

I’m currently reading #AnArrowtotheMoon and I’m loving it so much. I love the mix of modern, magical, and mythology. I adore the two main characters and I’m so eager to see how this story will end. It certainly has its sad moments but I’m fully engrossed in this novel just as I hoped I’d be. ☺️
Happy Saturday, friends! I’m so glad it’s the weekend! (When am I not?) I managed to finish #TheGirlWhoFellBeneaththeSea by #AxieOh during the week and it was just so good. I gave it 4 stars and loved the SPIRITED AWAY vibes!
Happy Sunday! This weekend has flown by. How does it happen so quick? 🥲 I’m going to take some time today to make a dent on both the book I’m physically reading and the one I’m listening to, the latter of which is #TheKinderPoison by #NatalieMae. I’m about 1/3 of the way through but I’m enjoying it a lot.
Happy Sunday! I’m just thinking about all the books scattered on my TBR pile and wondering when I’ll ever get to them. Anyone else wish books would stop publishing so quickly so I can stop buying them and instead focus on the books I currently own?! 🤣