I started Walk on Earth a Stranger as an audiobook, so I figured I’d continue the rest of the series that way. While I liked the first book, I’m a bit indifferent toward the sequel. 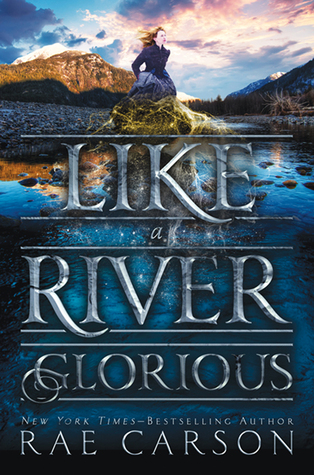 Lee Westfall survived the dangerous journey to California. She found a new family in the other outcasts of their wagon train, and Jefferson, her best friend, is beginning to woo her shamelessly. Now they have a real home—one rich in gold, thanks to Lee’s magical ability to sense the precious metal in the world around her.

But Lee’s Uncle Hiram has survived his own journey west. He’s already murdered her parents, and he will do anything to have Lee and her talents under his control. No one is safe. When he kidnaps her, she sees firsthand the depths of his depravity.

Lee’s magic is changing, though. It is growing. The gold no longer simply sings to her—it listens. It obeys her call. Will that alone be enough to destroy her uncle?”

While I wasn’t as enamored with book 2 as I was with book 1, I still enjoyed this. I absolutely love Lee as a character–her determination and general willpower is admirable, and she sure does put with with a lot of crap. I will admit that some parts of this book were hard to swallow, especially the blatant racism toward the Native Americans and the Chinese that were reflective of the time period. However, I’m glad to see that Lee was respectful and tried to help them when she was able.

One of the things that really made me raise my eyebrows as the revelation (plot twist?) of Lee’s parentage. I’m not willing to believe any of it, and I feel as if Carson is leading us on with that certain storyline. We don’t get too much of it in the first book, but I wonder if it will come into play at all in the third and if so… Why?

I liked how Leah’s power started to develop into something more, but at the same time, I ask myself how she has this power in the first place. Is she the only one? Does it have something to do with her parents? So many questions that I need answers to! I love the nickname she receives after the events of the last chapters though. 🙂 I love how Lee sees who her true family is as well. Honestly, she seems like a very genuine person who is trying to do her best, and I kept help but love her for it.

As for the romance… I’m still not convinced. I don’t know why. I don’t mind the trope of childhood friends turn into lovers, but I guess I was just never convinced in the beginning so now it’s trickling down into this book, too. Maybe the third book is the charm, and I’ll start liking them as a couple? Who knows! Which also reminds me of two older male characters named Tom and Henry who might be a couple as well, but it’s a tiny bit hard to discern since Lee doesn’t really bring much of that to light.

The writing draws you into this world of the California Gold Rush in 1840s America. It’s heartfelt how closely knit these people are, and it’s fun to see them continue on together. I actually quite like how Leah uses a bunch of similes and metaphors. She also has a deep internal struggle as well about staying where she is to help others or to leave but still helping them, but not as actively. Does that make sense? lol

I have to wait a bit before I can start the third book. The library only has one audiobook copy on the Overdrive app and there’s already three people who have it on hold. It’ll be fun to see where the author takes Leah. I feel as if the third book will be rather explosive due to the synopsis, and I hope it’s a good conclusion to the series.

You can buy this book from Amazon, Barnes and Noble, Book Depository, IndieBound, and other major booksellers. With the release of the third book, Into the Bright Unknown, the second book is now in paperback as well. 🙂

2 thoughts on “Review: “Like a River Glorious” by Rae Carson”