I’m not definitely back from my hiatus, and the more I think about it, the more I think it’ll continue on for a few more weeks for ~reasons~ other than vacation now, lol. But anyway, that’s not the point of this post!

Last week I drove to Texas to attend the Obsidio book tour with authors Amie Kaufman and Jay Kristoff! It took place at a gorgeous, two-story Barnes and Noble and wow, was it a great crowd! I knew I couldn’t miss going to this because 1) It was the first weekend of my spring break, so HELLO, what a way to celebrate, 2) when would these authors ever be near me again (let alone half-way across the world considering they’re Australian!), and 3) the event was moderating by the lovely Mary over at Mary Had a Little Book Blog!

First off, it was a truly great crowd! Unfortunately, the venue was a little cramped for the amount of people. I think there was a great deal of underestimation when it came to the size of the crowd, but Jay and Amie were awesome and tried to fit in as many people as they could into the general viewing section.

Amie showing off the Cadbury Creme Eggs I brought them. 🙂

It was a typical author event with the authors talking first and Mary asking questions and then a Q&A. They both spoke a bit about their work together (they’re working on another series together, too, guys! I don’t know if it’s been officially announced but maybe it will be soon! Jay talked briefly about his new book LIFEL1K3 which releases in May (and you can pre-order it and send your proof of purchase here for some cool swag) while Amie mentioned working on the sequel to Unearthed with Meagan Spooner.

I also did something that I always like to do with authors if I can which is bring them something special, like a food they like or gift cards to their favorite places. Since Jay and Amie are both Australian, I picked up as many flavors of Tim Tams as I could from a local Target before heading over to their signing. This was also influenced by Amie’s IG story around the time and how she was not impressed with American convenient store snacks, lol. 😂 She was over the moon! 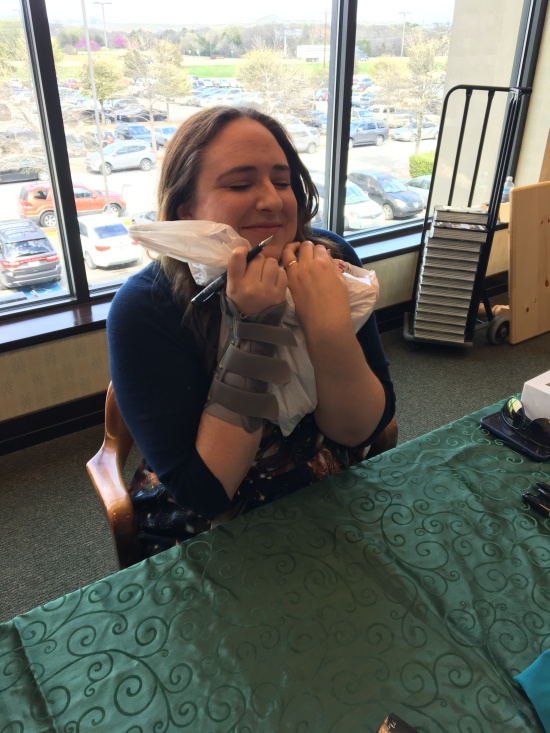 Happy Amie with the bag of Tim Tams! 😉

Overall, it was a great event! I’m so glad I attended. Because of the long drive I had to make (3.5+ hours), I was even allowed to get in the front of the line, so I also made it home at a reasonable time (I mean, that line was LONG).

Thanks a lot to Mary once again for taking all these pictures! What a pro! 😉

On the following weekend, I attended the Teen BookCon around the Houston, TX area and I’ll most likely post that next week, so keep an eye out if you’re keen for it!