I’m a little late to “finishing” this series, but with the novella, A Court of Frost and Starlight, releasing on May 1, I figured the time was nigh, lol. Truthfully, I was a bit hesitant. ACoTaR isn’t my favorite series by Sarah, ToG has that spot, and due to the sexual content of this book, I always want to make sure a solid storyline exists outside of the sex. Fortunately, I see that more in ACoWaR than with the first two. 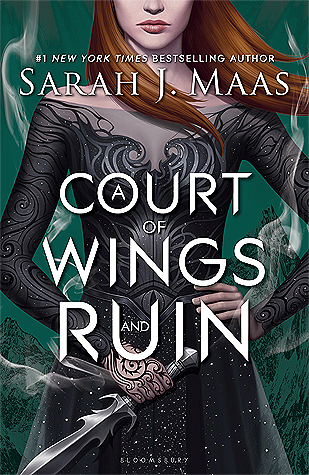 Title: A Court of Wings and Ruin (A Court of Thorns and Roses #3)
Author: Sarah J. Maas
Publisher: Bloomsbury USA Childrens
Release date: May 2, 2017
Genre: Young adult, new adult, fantasy, romance
Length: 705 pages (hardcover)
Synopsis: (via Goodreads) “Feyre has returned to the Spring Court, determined to gather information on Tamlin’s maneuverings and the invading king threatening to bring Prythian to its knees. But to do so she must play a deadly game of deceit – and one slip may spell doom not only for Feyre, but for her world as well.

As war bears down upon them all, Feyre must decide who to trust amongst the dazzling and lethal High Lords – and hunt for allies in unexpected places.

In this thrilling third book in the #1 New York Times bestselling series from Sarah J. Maas, the earth will be painted red as mighty armies grapple for power over the one thing that could destroy them all.”

I picked this book up quite some time after I finished A Court of Mist and Fury, but I read a few recaps to help me get back into the story. And I picked this up when I desperately needed to read fantasy despite already currently reading two books. I wanted to both slowly savor and speed through this book.

Sarah’s writing is incredibly captivating. I will forever applaud her world-building and her characters. Both are well-developed and draw you in, begging you to fall in love with every single part of them (okay, well, definitely not the bad guys but y’all know what I mean). A Court of Wings and Ruins is no different. My absolutely favorite part about this book was learning more about the different solar and seasonal Courts. Winter slowly became one of my favorites, mainly because I’m quite endeared to its High Lord and his wife. 😛 I also loved getting to know more of the Inner Court. This book was less about learning who they are, but about finding your place with them. Rhys appeared more vulnerable, which made me love him all the more. I wasn’t convinced of him in book 1, liked him in book 2, but here… I just wanna hug him.

I do wish, however, the author had done more with Nesta and Elain. Don’t get me wrong, they’re fantastic characters, strong, soft, powerful in their own way, but they kept me in the edge of my seat, especially since I knew the romantic tension lingering between Feyre’s two sisters and two other males. Maybe we’ll get more of that in the coming novellas.

“…I had considered it a different sort of strength. A better strength. To look at the hardness of the world and choose, over and over, to love, to be kind.”

And the sex wasn’t the main focus on the book, which turned me a bit off from ACoTaR and ACoMaF! Yes, there were select, sensuous scenes with Rhys and Feyre, but because their relationship was already well-established, I found it cute and a strengthening of their love for one another. Feyre isn’t much healing in this book as she’s finding out her own strengths, pushed by friends and family who’ve come to love and care for her. We also see how much Feyre embraced that dark, powerful part of her. It was lovely, and what great character development from book 1 and progressing from book 2.

“Remember that you are a wolf. And you cannot be caged.”

Now in terms of plot, I felt like everything in the last few chapters were like… Well, I thought of them like the Army of the Dead in Lord of the Rings: Return of the King. Not like that was a bad thing but it was like… All the myths and stories they’ve heard or been told had come to life right before their eyes. But that doesn’t make me question the King of Hybern any less. He would have been nothing without that Cauldron! N o t h i n g. And my sweet, fierce Elain coming to rescue! She deserves all the goodness, happiness, and love in the world.

For writing… Well, I’m praying for the day I no longer have to see the phrase “vulgar gesture” in any of her books. It’s incredibly overused, not only in this series but also noted in Throne of Glass series as well. I actually found some of the same writing style problems in this book as I did with Tower of Dawn. Sentences that are obviously questions that don’t end with a question mark! Stylistically, it can be rather annoying.

Overall, a great “end” to this series. I admit, though, I want to see what else Sarah can write besides Fae.

You can purchase this book from Amazon, Barnes and Noble, Book Depository, IndieBound, and other major booksellers.

If you’ve pre-ordered A Court of Frost and Starlight, you can submit your receipt from a pre-order goodie here.

4 thoughts on “Review: “A Court of Wings and Ruin” by Sarah J. Maas”