The last time I did one of these posts was back in May! 😲 Well, considering I took a hiatus (and I’m pretty sure I’ll sink back into one in a few weeks), I thought I’d post some August releases I’m excited for!

‘Waiting on’ Wednesday is a weekly blog meme hosted by Breaking the Spine that spotlights upcoming releases (obviously).

This releases on August 7! While I wasn’t a fan of Raasch’s previous trilogy, Snow Like Ashes, I’m fairly excited about These Rebel Waves. There’s a fair amount of pirate / siren books releasing in the next couple of years. While I don’t normally gravitate toward those books, the cover of TRW drew me in. And the author will be at my local indie bookstore in September! You can check out Sara’s full tour schedule here. Here’s the synopsis for These Rebel Waves:

Adeluna is a soldier. Five years ago, she helped the magic-rich island of Grace Loray overthrow its oppressor, Argrid, a country ruled by religion. But adjusting to postwar life has not been easy. When an Argridian delegate vanishes during peace talks with Grace Loray’s new Council, Argrid demands brutal justice—but Lu suspects something more dangerous is at work.

Devereux is a pirate. As one of the outlaws called stream raiders who run rampant on Grace Loray, he pirates the island’s magic plants and sells them on the black market. But after Argrid accuses raiders of the diplomat’s abduction, Vex becomes a target. An expert navigator, he agrees to help Lu find the Argridian—but the truth they uncover could be deadlier than any war.

Benat is a heretic. The crown prince of Argrid, he harbors a secret obsession with Grace Loray’s forbidden magic. When Ben’s father, the king, gives him the shocking task of reversing Argrid’s fear of magic, Ben has to decide if one prince can change a devout country—or if he’s building his own pyre.

As conspiracies arise, Lu, Vex, and Ben will have to decide who they really are . . . and what they are willing to become for peace.

This book also released on August 7! Of course I’m excited to return to The Remnant Chronicles world with Dance of Thieves. Mary will be touring 3.5 hours south of me. I’m not sure I’ll be able to make it there despite it being a Friday. I work that day and have a very limited amount of days I can take off. I’m going to try really hard, though! You can also see Mary’s tour dates here. Here’s the synopsis:

A new novel in the New York Times–bestselling Remnant Chronicles universe, in which a reformed thief and the young leader of an outlaw dynasty lock wits in a battle that may cost them their lives—and their hearts.

When the patriarch of the Ballenger empire dies, his son, Jase, becomes its new leader. Even nearby kingdoms bow to the strength of this outlaw family, who have always governed by their own rules. But a new era looms on the horizon, set in motion by a young queen, which makes her the target of the dynasty’s resentment and anger.

At the same time, Kazi, a legendary former street thief, is sent by the queen to investigate transgressions against the new settlements. When Kazi arrives in the forbidding land of the Ballengers, she learns that there is more to Jase than she thought. As unexpected events spiral out of their control, bringing them intimately together, they continue to play a cat and mouse game of false moves and motives in order to fulfill their own secret missions. 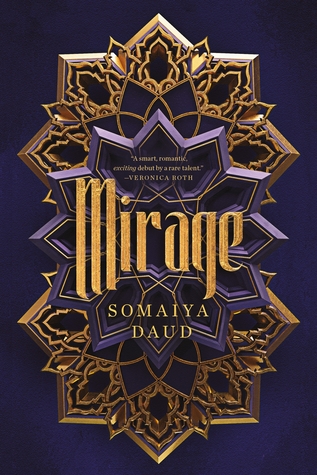 Mirage releases on August 28. The cover on the right is the U.S. edition, the left the U.K. edition. Both are so pretty, and I don’t know which one I want to get! Serious book nerd problems, right? 🤣 I believe Daud announced her tour dates as well, but I can’t find them on her website. If anyone can link them below, I’ll be grateful, and I’ll be sure to update this post with the dates! 🙂 I’ll leave the synopsis for Mirage below (and it sounds AMAZING!):

In a star system dominated by the brutal Vathek empire, eighteen-year-old Amani is a dreamer. She dreams of what life was like before the occupation; she dreams of writing poetry like the old-world poems she adores; she dreams of receiving a sign from Dihya that one day, she, too, will have adventure, and travel beyond her isolated moon.

But when adventure comes for Amani, it is not what she expects: she is kidnapped by the regime and taken in secret to the royal palace, where she discovers that she is nearly identical to the cruel half-Vathek Princess Maram. The princess is so hated by her conquered people that she requires a body double, someone to appear in public as Maram, ready to die in her place.

As Amani is forced into her new role, she can’t help but enjoy the palace’s beauty—and her time with the princess’ fiancé, Idris. But the glitter of the royal court belies a world of violence and fear. If Amani ever wishes to see her family again, she must play the princess to perfection…because one wrong move could lead to her death.

What books are you excited for in the coming months?