Oh wow, little did I know how much I would come to like all these characters. I was instantly swept up and away into this world of daevas, djinns, magic, and quite a lot of mayhem! I’m so glad getting an ARC of its sequel, The Kingdom of Copper, was the push I needed to start this series (but I’m also sad that I didn’t start this series earlier, too)! 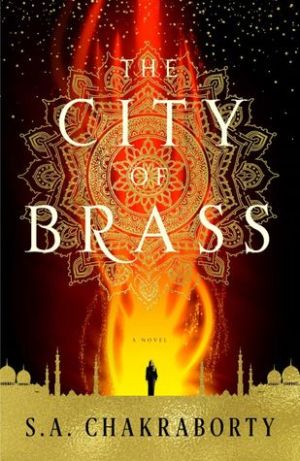 Title: The City of Brass (The Daevabad Trilogy #1)
Author: S.K. Chakraborty
Publisher: Harper Voyager
Release date: November 14, 2017
Genre: Historical fiction, fantasy
Length: 533 pages (hardcover)
Synopsis: (via Goodreads) “Nahri has never believed in magic. Certainly, she has power; on the streets of 18th century Cairo, she’s a con woman of unsurpassed talent. But she knows better than anyone that the trade she uses to get by—palm readings, zars, healings—are all tricks, sleights of hand, learned skills; a means to the delightful end of swindling Ottoman nobles.

But when Nahri accidentally summons an equally sly, darkly mysterious djinn warrior to her side during one of her cons, she’s forced to accept that the magical world she thought only existed in childhood stories is real. For the warrior tells her a new tale: across hot, windswept sands teeming with creatures of fire, and rivers where the mythical marid sleep; past ruins of once-magnificent human metropolises, and mountains where the circling hawks are not what they seem, lies Daevabad, the legendary city of brass, a city to which Nahri is irrevocably bound.

In that city, behind gilded brass walls laced with enchantments, behind the six gates of the six djinn tribes, old resentments are simmering. And when Nahri decides to enter this world, she learns that true power is fierce and brutal. That magic cannot shield her from the dangerous web of court politics. That even the cleverest of schemes can have deadly consequences.

After all, there is a reason they say be careful what you wish for…”

I did find the pacing of this book a bit slow at times, but I did enjoy reading each chapter and learning more about the characters. I love how we’re introduced to a cunning, fierce young woman who’s doing her best to survive when she has no memory of her parents or much of her past. I loved learning about the world of Daevabad and even felt the pressure placed on Nahri when she discovers who she is. I loved the blossoming friendship (/romance?) between her and another main character. I really enjoyed how easily I fell for Dara and how we slowly discover who he is. The ending though… It happened so fast! One punch after another and I was left completely dazed. Like… How?! And why?! But oh boy, am I ready to see Nahri eat some men alive in the next book… (Hopefully.)

Again, I fell for Dara rather quickly and I was surprised. He’s witty, vulnerable, protective, and isn’t afraid to bad mouth people and put them in their place. He has such a soft spot for Nahri, and it’s really adorable. To be quite honest, I liked most of the major characters in this book, warming up to even Ali despite how much I questioned him earlier in the book. I like how he and Nahri were able to relate and enjoy each other’s company despite both of their underlying motives. I liked Ali’s relationship with his elder brother, too. I can say for sure that I don’t like the king. He’s manipulative, and I still don’t quite understand what his true motives are. We don’t spend a lot of time with him as readers, but when it’s mentioned that he doesn’t know how to read because he’s in a position to have people read for him… Ugh. Huge eye roll from me, and I seriously hope that comes to bite that man in the butt. As I said before I cannot believe the ending, nor will I believe for one second that a particular character is gone. Nope. I refuse!

I think I would react in the same way Nahri does in many situations. She’s confident in the human world, but when she enters this magical world of Daevabad, she completely questions her skills and abilities. It was nice to read how she slowly gains confident in herself outside of the men in her life and those pushing her.

On another note, I think there’s a bit of queer-baiting between two characters, which we don’t really see until the end, and when seen on page, it’s ignored or slushed aside. (Someone feel free to correct me if I’m wrong and I’ll edit this post if I am.)

I was completely enraptured with the first page. I loved discovering Daevabad along with Nahri. I enjoyed learning and discovering this non-Western world and mythology, too. If you had told me this was Chakraborty’s debut novel, I would have thought you were lying. I truly can’t wait to see what happens in the next book.

You can purchase a copy of this book from Amazon, Barnes and Noble, Book Depository (U.K. edition), or find it at your local independent bookstore using IndieBound.

5 thoughts on “Review: “The City of Brass” by S.A. Chakraborty”