There are so many September releases I have my eye on, and I know there’s no way my wallet can handle it all. I’m fortunate enough to have a large branch of libraries in my area, and I already have so many books on hold. 🙈

‘Waiting on’ Wednesday (WoW) is a book blog meme hosted by Breaking the Spine. It’s really easy to participate: all you have to do is feature upcoming books you’re excited about–it doesn’t necessarily have to release the next month. But for my own sanity, I try to feature books month-by-month. 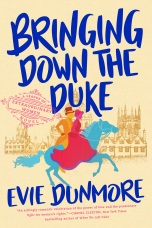 Is it cheating if I include Bringing Down the Duke even though I read it as an eARC and really liked it? Oh well! LOL Also, the buzz and hype around Serpent & Dove is REAL. I’m pretty sure a few book boxes are including it as their book of the month, and I’m tempted to spend money on one of them. Not sure which one yet. Also, I can’t believe we’re finally going to have the conclusion of the Three Dark Crown series in our hands!

There’s still time to submit your pre-order receipt for Serpent & Dove for some wonderful goodies. Check out how to do that on the author’s Twitter.

Capturing the Devil is the final book in the Stalking Jack the Ripper series. I can’t believe it’s ending soon. You can submit your pre-order receipt for this one as well. There’s a U.S. link and an international one as well, so make sure you choose the right one. 🙂

I was fortunate enough to receive an ARC of Frankly in Love (which I did in fact LOVE and you can check out my review here) and there’s also still time to submit your pre-order receipt for a chance to win a cool enamel pin a possibly a tote bag! Also, the book tour has been announced, and if you’re going to be in the DFW area on September 15… Guess where I’ll be?! 😛

SLAY caught my attention due to the synopsis. I mean, as an occasional gamer and lover of MMOs (when they were popular, lol), I was like, “YES.”

Check it out here:

By day, seventeen-year-old Kiera Johnson is an honors student, a math tutor, and one of the only Black kids at Jefferson Academy. But at home, she joins hundreds of thousands of Black gamers who duel worldwide as Nubian personas in the secret multiplayer online role-playing card game, SLAY. No one knows Kiera is the game developer, not her friends, her family, not even her boyfriend, Malcolm, who believes video games are partially responsible for the “downfall of the Black man.”

But when a teen in Kansas City is murdered over a dispute in the SLAY world, news of the game reaches mainstream media, and SLAY is labeled a racist, exclusionist, violent hub for thugs and criminals. Even worse, an anonymous troll infiltrates the game, threatening to sue Kiera for “anti-white discrimination.”

Driven to save the only world in which she can be herself, Kiera must preserve her secret identity and harness what it means to be unapologetically Black in a world intimidated by Blackness. But can she protect her game without losing herself in the process?

But I know this book is going to have much more important themes in it than gaming. Also, check out this amazing pre-order campaign going on for SLAY!

Whew! I hope that wasn’t too much information in one post! Let me know what books you’re excited for in September!