Heavens me, I can’t believe this is really the end! I was absolutely thrilled to return to the world of Legend and see what Day and June were up to. Now we also have Eden in the picture, and I found the dynamic quite interesting.

This review is long overdue! I actually finished it a couple of months ago and have been meaning to post a full review about it but… Life got in the way, along with the business of the holidays! 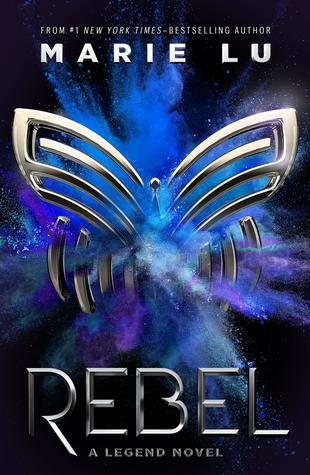 Eden Wing has been living in his brother’s shadow for years. Even though he’s a top student at his academy in Ross City, Antarctica, and a brilliant inventor, most people know him only as Daniel Wing’s little brother.

A decade ago, Daniel was known as Day, the boy from the streets who led a revolution that saved the Republic of America. But Day is no longer the same young man who was once a national hero. These days he’d rather hide out from the world and leave his past behind. All that matters to him now is keeping Eden safe―even if that also means giving up June, the great love of Daniel’s life.

As the two brothers struggle to accept who they’ve each become since their time in the Republic, a new danger creeps into the distance that’s grown between them. Eden soon finds himself drawn so far into Ross City’s dark side, even his legendary brother can’t save him. At least not on his own…”

There were times when I found the plot to be a little slow and predictable, especially since the “bad guy” was known very early on and how he had a vendetta against the level system that makes up Antarctica society. I completely understood Eden wanting to separate and make a name for himself outside of his brother, Daniel. I so enjoyed being back in this world, and following Day and Eden and their lives ten years after Champion. That’s what made this book the most fun for me–that I loved the world and characters so much, adored Lu’s writing as well, that I was eager to return. I listened to this as an audiobook, and I’m glad they kept the same narrator for Day. I feel like it would have been weird if he were voiced by a different narrator. The fact that Day and Eden found a place in Antarctica, outside of the Republic, made me really happy. It’s interesting to see how this place functions after the events of the first three books. I’ll admit though that I wanted some story from June’s perspective as well. The whole re-blossoming romance between June and Day was so adorable, and the ending was so perfect that I found myself tearing up!

I’m pretty sure I’m repeating myself, but these characters! I loved following Eden along and seeing the life he has with his brother, his school activities, his inspirations, and just how clever and smart he is. If you’ve read the first three books in this series, you’d know that Eden is pegged early on as being very smart. (To be honest, I think he could rival June but we don’t get a lot of information in regard to that.) I thought it was really heartbreaking, too, to re-learn and re-discover memories with Day, but I loved that the light–almost the key–to his memories was June. You could tell, even though we don’t get her POV, that she was as hesitant and wary as Day when it comes to how much she should reveal. I loved the way they grew.

I really applaud Marie Lu for returning to a world we haven’t seen in years. If you’ve read the previous books, it’s so easy to fall back into this world. But even if you haven’t, Lu does a good job recapping the story using Day’s narrative. I may be a little bias, though, because Marie Lu is one of my favorite authors. 😛 I think one of the hardest things to explain in this world is how the level system for Antartica works, but I think she explained it well enough that it isn’t hard for a new reader to understand (though you’ll see the connection to Warcross if you’ve read that series, too)!

You can purchase this book from Amazon, Barnes and Noble, Book Depository, or find it at your local independent bookstore with IndieBound.