A huge thank you to PenguinTeen for giving me a free early copy in exchange for a review.

Y’all. I am so disappointed with this book. 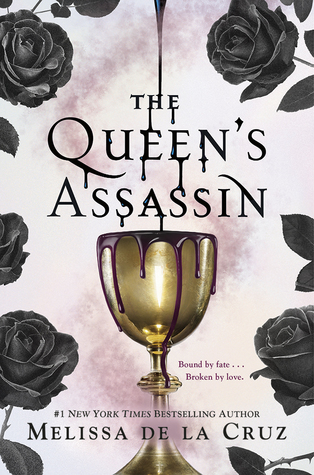 Title: The Queen’s Assassin (Queen’s Secret #1)
Author: Melissa de la Cruz
Publisher: G.P. Putnam’s Sons Books for Young Readers
Expected release date: February 4, 2020
Genre: Young adult, fantasy, romance
Length: 384 pages (hardcover)
Synopsis: (via Goodreads) “Caledon Holt is the Kingdom of Renovia’s deadliest weapon. No one alive can best him in brawn or brains, which is why he’s the Guild’s most dangerous member and the Queen’s one and only assassin. He’s also bound to the Queen by an impossible vow–to find the missing Deian Scrolls, the fount of all magical history and knowledge, stolen years ago by a nefarious sect called the Aphrasians.

Shadow has been training all her life to follow in the footsteps of her mother and aunts–to become skilled enough to join the ranks of the Guild. Though magic has been forbidden since the Aphrasian uprising, Shadow has been learning to control her powers in secret, hoping that one day she’ll become an assassin as feared and revered as Caledon Holt.

When a surprise attack brings Shadow and Cal together, they’re forced to team up as assassin and apprentice to hunt down a new sinister threat to Renovia. But as Cal and Shadow grow closer, they’ll uncover a shocking web of lies and secrets that may destroy everything they hold dear. With war on the horizon and true love at risk, they’ll stop at nothing to protect each other and their kingdom in this stunning first novel in the Queen’s Secret series.”

Can I write this entire review using gifs? I feel like it would demonstrate how frustrated I am that this wasn’t what I thought it would be. 😦 First off, if you’re going to promote the book as a fantasy romance, I feel like you really ought to have the romance aspect earlier in the book. I know you might laugh, considering this is the first book in a series and there needs to be development. Fine. Okay. But at least convince me that the two main characters actually have feelings for one another. They grew so agitated with one another and threw some very mixed signals that I found their budding romance a bit unbelievable. I found some instances a bit repetitive as well, and the plot moved rather quickly and somewhat slowly at the same time.

I found the premise really interesting, though, especially the history behind how Caledeon is “bound” to the Queen, and I liked how the author weaved into brief historical records into the story as well to give the reader background information, perhaps even parts the main characters themselves didn’t know. There’s also a big looming secret that I’m quite surprised Cal didn’t suspect from the very beginning or at least a few days in with his journey with Shadow. Somehow I also found their journey a bit…easy? I won’t say much else due to spoilers but I was incredibly frustrated!

I also thought there were some plot holes in this book as well. I can’t name specifics due to spoilers but… Does anyone have anyone else’s best interests in mind besides Shadow and her aunts?

To be honest I’m not sure what to make of our main characters, Shadow and Cal. They’re equally frustrating but also…not super interesting. I feel bad for both of them and their situation. I don’t really care for the Queen either, someone who I initially thought I would like. Some characters I can actually get behind are Shadow’s aunts. I’m sure their backstory is incredibly interesting.

It’s not that I didn’t find Shadow and Cal likable, especially after everything they’ve gone through, not just together but as individuals. They want to carve out paths for themselves but due to the actions of their parents, it’s a struggle, and we see them confined to those around them. It’s quite sad really.

This is the first book I’ve read by de la Cruz, so I can’t compare the writing in this book to previous ones. However, I can say that I wanted more descriptions. Everything felt a bit generic and I wasn’t drawn completely into the world. The world-building was good, but I sure hope there is a map in the finished copy.

Check out these other reviews here:

You can pre-order this book from Amazon, Barnes and Noble (a signed edition!), Book Depository, or find it at your local indie bookstore with IndieBound. If you decide to pre-order, you can submit your receipt for some goodies!

One thought on “ARC Review: “The Queen’s Assassin” by Melissa de la Cruz”