How are we halfway through August already? This always brings up the question, “How are we over halfway through with 2018?” I have to stop thinking about it because while it seems time goes by slowly, it always goes by quickly as well.

The good thing about that is… New releases! And September has a handful of them I’m keeping an eye out for! Let’s see what they are… 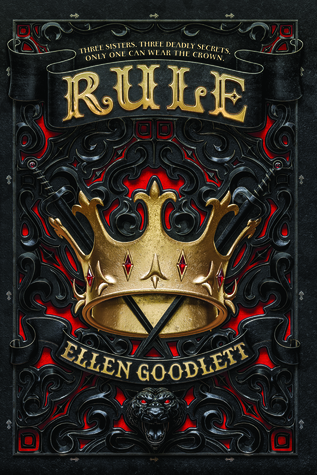 First off, can we take a moment to admire this cover because it’s incredibly gorgeous! I know they say not to judge a book by its cover, but these publishers are hitting the cover game out of the park!

Rule releases on September 11, and the synopsis is just right up my alley!

The king is dying, his heir has just been murdered, and rebellion brews in the east. But the kingdom of Kolonya and the outer Reaches has one last option before it descends into leaderless chaos.

Or rather, three unexpected options.

Zofi has spent her entire life trekking through the outer Reaches with her band of Travelers. She would do anything to protect the band, her family. But no one can ever find out how far she’s already gone.

Akeylah was raised in the Eastern Reach, surrounded by whispers of rebellion and abused by her father. Desperate to escape, she makes a decision that threatens the whole kingdom.

Ren grew up in Kolonya, serving as a lady’s maid and scheming her way out of the servants’ chambers. But one such plot could get her hung for treason if anyone ever discovers what she’s done.

When the king summons the girls, they arrive expecting arrest or even execution. Instead they learn the truth: they are his illegitimate daughters, and one must become his new heir. But someone in Kolonya knows their secrets, and that someone will stop at nothing to keep the sisters from their destiny… to rule.

Magic, mystery, and blackmail abound in this sensational and striking fantasy debut.

Both Wildcard and Escaping from Houdini release on Sept. 18. Wildcard is the final book in the Warcross duology, while Escaping from Houdini is the third book in the Stalking Jack the Ripper quartet. I plan to reread Warcross, but not the latter. I didn’t read Hunting Prince Dracula too long ago, so I’m fairly certain I remember everything… We’ll see. 🙂 And I’m super excited to say that Marie Lu will be touring near me for Wildcard! I saw her for the Warcross book tour, so I’m ecstatic to be able to see her again. You can check out the full dates and stops here!

Another cover I’ve fallen in love with! This one screams dark (obviously, haha) and fierce

female character! I can’t wait! I’ll admit that I’ve read only one book by Revis, and I didn’t like it enough to finish the series. But I’m willing to give her another go because this book sounds amazing! Give the Dark My Love releases on Sept 25. Here’s the synopsis:

When seventeen-year-old Nedra Brysstain leaves her home in the rural, northern territories of Lunar Island to attend the prestigious Yugen Academy, she has only one goal in mind: learn the trade of medicinal alchemy. A scholarship student matriculating with the children of Lunar Island’s wealthiest and most powerful families, Nedra doesn’t quite fit in with the other kids at Yugen, who all look down on her.

All, except for Greggori “Grey” Astor. Grey is immediately taken by the brilliant and stubborn Nedra, who he notices is especially invested in her studies. And that’s for a good reason: a deadly plague has been sweeping through the North, and it’s making its way toward the cities. With her family’s life–and the lives of all of Lunar Island’s citizens–on the line, Nedra is determined to find a cure for the plague.

Grey and Nedra continue to grow closer, but as the sickness spreads and the body count rises, Nedra becomes desperate to find a cure. Soon, she finds herself diving into alchemy’s most dangerous corners–and when she turns to the most forbidden practice of all, necromancy, even Grey might not be able to pull her from the darkness.

What books are you excited for in September? Let me know in the comments! 🙂